Most Holiday seasons I manage to make my way down to Miami for the Orange Bowl regatta.  Well,  this season we decided to not make the trip and have had to live vicariously through Chuck Lessick’s daily updates of Reagan in the annual Orange Bowl regatta.  79 degrees, salt spray, and lots of sailors.  Both of my (now sort-of grown up) boys along with several other previous ECSC Junior Sailors have competed in several south Florida winter events and it is great to see Reagan continuing the ECSC tradition.  I am sure she will bring back the skills she has learned and compete at at even higher level.   Check out the Orange Bowl ECSC Pictures on the ECSC Junior Sailing Facebook page.

As for ECSC’s bustling Publicity office,  we have updated our website to include next year’s calendar, our new board members and many other useful items.  Please notify me if any items on the calendar are incorrect and I will have our calendar intern fix them as soon as possible.

Category: Commodore
As our season nears the end, all of our Board members hope you had an enjoyable, safe year of fast sailing and many fun social events. We still have a few more to come with the ECSC Championship, Hornback Regatta and the the Final Bash.
Personally, I want to thank ECSC for helping me improve my sailing skills – especially in light air. More importantly, please join with me in thanking all of the ECSC Board of Directors, the Committee Chairs and all of our wonderful volunteers for making the 2017 sailing season a great success. Hope to see you on the water in October and again next year.
Larry Conrad

It is hard to believe that our season is coming to an end already!  What a fun filled summer we have had this year.  The Hornback is right around the corner.  On October 14th, we will break up the two day Hornback Regatta with a Chili Cookoff!  Jennifer Curtis will be our Hostess again.  She has plenty of fun and games planned for all ages!   This event will kick off at 5:00pm.  All those interested in participating in the Chili Cookoff should bring your Chili and fixin’s.  Those just wishing to sample and vote can bring a dish to pass as a contribution to the event.

Make sure you mark your calendars and Save the Date for the Final Bash, held on November 4that 6:30pm.   I understand Perry Cameron and his planning team have some nice surprises for us as well!  Be on the lookout for more information and be sure to RSVP!

Ahoy Creekers, this may be my last article as Harbormaster as  the incoming Commodore has another member in mind for the position.

I have done my best to have our club run as a real Marina.

If your boat borders the green space (grassy area) when it is on its trailer, please make sure it does not impede the guys cutting the grass, or I will have to move your boat.

The water level has dropped about a foot in the past week.  There are some boats on C dock that are touching bottom. You can always check the water level at Eagle Creek Water Level.

Also, remember that NO TRAILERS are to be parked in the car corral prior to the end of the Chili Cook-off (scheduled for OCT. 14th)

Your current stickers on your boat are the only way I know that you have paid your dues? Under Indiana law if you belong to an organization like this and haven’t paid dues for six months, guess what, we now own your boat.

I would suggest getting your stickers on as soon as you get them. Currently we have several members that refuse to put their current stickers on their boats and trailers.

So I am going to submit to the board of directors a motion to fine all members without current stickers on boat and trailer a $100.00 fine. This fine will be multiplied by the last old sticker you have on your boat. Fines will be tallied as I do my usual accounting of boats stored at the club in the very beginning of December. If you get your stickers on by May or June you should be good.

If you have any comments about  the work of the current Harbormaster  department, talk to members of your board of directors

September was a busy month for us at ECSC. We hosted 3 regattas, closed out our Summer Series and started the Twilight Series. 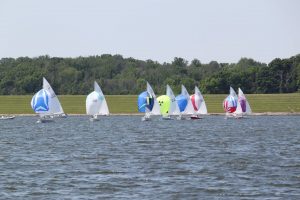 The Wednesday and Sunday Summer Series have concluded. Results have been posted to the 2017 Series Racing page of the web site. Winners of the Series’ will get valuable points towards the Boat of the Year trophy.

Speaking of Boat of the Year, the current standings have been posted to the web site. The final event for the BOTY is the Hornback. Scoring is set up such that the Hornback standings can significantly affect the overall BOTY standings.

The Purdue Sailing Club hosted their Boiler Cup regatta on Labor Day weekend after a several-year absence on the collegiate sailing calendar. Turnout was light due to the late notice, but the sailing was fierce. The clubs were tied going into the last race. We hope to have better turnout next year as the Boiler Cup is now back on the sailing calendar. Thanks to Tom Moore for helping out on RC.

The Indy 200 Regatta was a huge success again this year. We had 8 boats compete and almost 40 people participate. Larry Conrad won the Regatta on his Seward 26. Bob Hickok finishing

second on a Catalina 25. Bob McCoun was third on his S2 7.3. Other competitors included: Tom Newgent on his S2 7.3, Les Miller on his S2 6.9, Chuck & Nancy Goff on their Cataline 25, Steve Earnhart on his Catalina 25, and Dan & Karen Orndorff on their ODay 23. Special thanks to Rich Fox for coordinating this event for the Blue/White fleet boats and to Tom Moore for helping out on RC.

The Governor’s Cup regatta had a lighter than usual turnout this year. We didn’t get any Highlanders and no ISC J24s. Winds were light and variable, but we managed to get 7 races in over 2 days. We had 2 Green fleet boats – a Laser and a Finn. It ended up being a grudge match. One White fleet boat, 2 J-22’s and 5 J-24s.

This year our ECSC J24 competed in the second year of the Hoosier J24 Championship series.  This series includes ECSC’s Governor’s Cup and Mayor’s Cup Regattas and ISC’s Geist Guzzler and Keelover Regattas. Last weekend 8 J24s raced in the final regatta (the Keelover regatta) at our sister club across town. While ECSC Member Richard Graef and his crew aboard Don’t Panic won the regatta, ECSC member Jason Hubbard scored enough points to claim the Overall title for the 2017 season. Jason Scored 23 points overall and raced in all four regattas.  Congrats to Jason and his team aboard Green Hornet for the individual title. The club championship was awarded to ECSC again for the 2017 season. This series has been successful in building our local J24 fleet. This year we had 12 boats from both clubs that participated. Results can be found below.

The ECSC Championship regatta will be held on October 7. This is the first year for this regatta. All boats will race both in fleet and PHRF on the same course with a single start. We will announce a fleet champion and an overall club champion. Qualifiers for the event include: Tom Newgent, Larry Conrad, Les Miller, Bill Grant, Rich Fox, Mike Clark, Geoff Endris, Chuck Goff, John Kohne, Scott Douglas, Rick Graef, Bob/Janet Hickok (J24), Nan Schulze.

Our final regatta for the year is the Hornback regatta. This is always a fun race because it is a pursuit race. This means that instead of starting everyone at the same time and adjusting the finish times, we stagger the starts so that the first boat over the finish line wins the race. Always a good time and always some interesting courses. This year, we are bringing down Purdue Sailing Club members to crew. So, if you need a crew, send an email to Geoff Endris. The Hornback is now included in the Boat of the Year standings and can have a huge impact as the Hornback is scored as a single fleet.

Welcome to four new members in September   Jim and Carissa Bartek of Westfield.  Lee Crowther of Carmel who will be sailing a Hunter 26.  Peter and Mary Hansen of Indianapolis, sailing a Capri 22.  Greg Roshel of Avon.

It’s been a good and busy season.  Christy has conducted three New Member Orientation sessions throughout the year that have been well attended.  We have a total of 22 new members to date in 2018, bringing the grand total to 249 active members as of 9/28/17.

As we head into 2018, Christy and I have been asked to remain at the helm of the membership committee and we are pleased to do so for another year.   Feel free to contact either one of us with any questions or concerns regarding the club.