It’s summer and ECSC is full of activity.  Head out to the club on any weekend and you will see:

All this means we have a very vibrant and active club.  So, please come on out and enjoy all that our club has to offer.

Our ECSC Regatta is coming up on July 9-10 with our world famous ECSC Beach Party on Saturday July 9.  This is a great event.  We had almost 200 people RSVP for a night of dancing on the beach.  Hats off to Kenny for moving boats around to make room for the partiers.  Be sure to thank him for all of his hard work to make everyone’s weekend enjoyable.

By now you have probably encountered our new web site.  It is truly an upgrade from our old site with lots of content and room for us to grow.  Check it out next time you are online.

Welcome to our new members.  Thanks for joining.  Please introduce yourselves to just about everyone you meet. We would love to get to know you better and get you involved in our club.…

We have a lot of social events in the summer.  We already had a successful Mother’s Day brunch and Father’s Day brunch.  Next up is the very popular July 4th Pig Roast.  That is followed by the newly revived ECSC Beach Party on July 9th.  I hope you sent in your RSVP for this popular event.

Our big event for August is the annual Lobster Boil.  This is another RSVP event so we know how many lobsters to order.  Please, please, please, please be sure to RSVP so we have enough for everyone.  And when we say one lobster per person, please take only one lobster so that everyone who ordered one can get one.  If there are extras, you are more than welcome to go back for seconds.

We still need volunteer hosts and crew for some events.  Check the “Host/Crew Assignments” link on the Social page for openings.  You will receive valuable work credits to offset next year’s membership dues.

Still a lot of work to do

Hopefully, you have noticed a lot more room at the club.  Thanks to Dennis Robertson, we have removed some abandoned boat eyesores freeing up some much needed parking space.  You will also notice the gravel is a little brighter.  We brought in some new gravel and took the opportunity to expand the parking area a bit.  You will notice a little extra room heading back to the power washer and a little more room between boats in the back lots.  This allowed us to move some of the other dilapidated boats to the back of the club.  The result is a fresher look as you come down the main drive.  Thanks to all who cooperated with us in the gravel project.

The old Race Shed has been moved to its new location across from the beach.  this will be the new home for the Purdue Sailing Club.  They will be showing up at the club in the next month or so to move their gear into the shed, clean it up and make it their new PSC HQ.  Please be sure to say “Hi” to them and welcome them to the club.  Remember, they might be the ones who buy your boat in 4 or 5 years.

We mentioned this last year, but it bears repeating.  Please coil your dock lines neatly next to your dock cleats.  We have members walking to/from their boats with their arms full of “boat stuff”.  In the past, we have had members trip and injure themselves on dock lines.  Please be considerate to your fellow club members and tidy up around your boat.  And if you have time, tidy up your neighbor’s too.

We still have lots of work projects for those who are handy with tools and want to earn some work credits.  Please see me or Dennis for details.

Knee High by the fourth of July

Well, it is July in Indiana, the corn is knee high, and our racers are ripping it up here on our home waters and across the country.  Our Wednesday Spring Series has just concluded with great racing all Spring.  Congrats to Les Miller for winning the new Blue Fleet in his S2 6.9 Turbolina.  The winner of White Fleet, our largest fleet (13 boats) was Mike Clark sailing his Precision 23, Logos. Green Fleet was won by Dr. Bob and Kenny sailing the Highlander, Kowa Bunga. The always competitive Red fleet was topped by Bob and Janet Hickok in Spontaneous Combustion (J24).

Sunday Racing has been building strongly this year. Sunday races are scheduled from 2 to 4 during June, July and August.  New this year are club championships that will be sailed concurrently with the rest of the Sunday fleet. Our innaugural Catalina 25 Championship was won by Bob Hickok. Check the schedule for upcoming club championships.

Speaking of championships, the 2016 J24 Hoosier championship are 2 out of 4 regattas in.  This is a new series between the J24 fleets of ECSC and ISC. ECSC Mayor’s Cup and Governor’s Cup along with ISC Geist Guzzler and their Keelboat regatta count for the series. With Mayor’s Cup and Geist Guzzler completed ECSC is in the lead. There will also be an individual winner named. Jason Hubbard finished highest from our sister clubs in the Mayors cup, and Perry Cameron was on top during the Geist Guzzler. The scoring system for this series is a high point scoring system. After the accountants at ECSCScoring.notarealwebsite.com  tabulated the results…… Jason and Perry are tied with 13 points each.  Full scoring for the regattas and the Hoosier championships can be found on the racing page.

Don’t Forget the ECSC Regatta and Beach Party is coming up on July 9th and 10th. Our Past Commodore Nick Mates has great plans for the beach Party. Dr. Bob and Kenny will be sharing Race Officer duties. The NOR is available on the website and the SIs and entry forms are posted at the bottom of the race page. 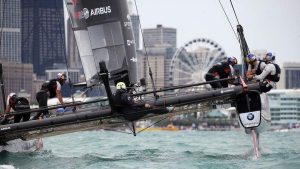 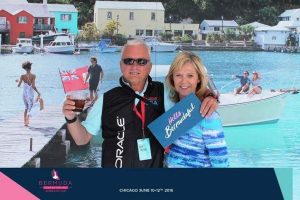 Last month we had several of our ECSC members make the trek to Chicago for the Americas Cup World Series racing in Chicago.  This was the first time any Americas Cup racing ha

s ever been sailed in fresh water! Chicago put on quite an amazing event and the Americas Cup is sure to return in the future. The AC 45 catamarans tore up the waters of Lake Michigan and even set a new speed record during a race. 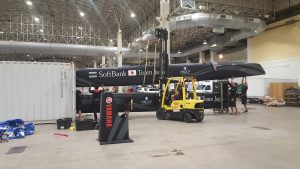 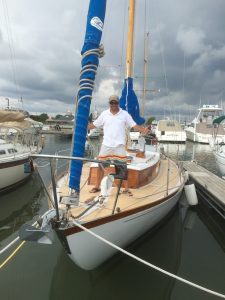 Integrity nearly ready for her 235 mile race to Mackinac Island

ECSC will be represented in this years Port Huron to Mackinac race.  This is an annual race sponsored by Bayview Yacht Club. Captain Tony Hubbard has entered  his deep-draught Ocean Racer s/v Integrity. She is a 1961 Alden Challenger Yawl. Your fearless race chair will be aboard for this momentus race. We will be sailing the Shore course (slightly shorter than the Cove Island course) which is 235 miles long. 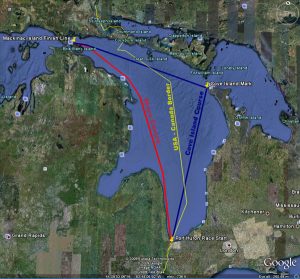 For more info check out the website at www.bycmack.com . There is also a tracker on the website so you can be part of the action. Integrity is in Class N and will proudly be carrying an ECSC Flag and Burgee.  I believe that this is the first time a boat registered from ECSC has competed in this race. 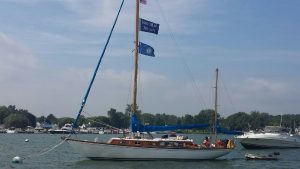 Integrity on a ball at Put in Bay

Special thanks to everybody that has kept our race program running smoothly.  See you on the water.

There will be a New Member Orientation in the upper shelter house on Sunday, 7/17  1:00 pm.

NEW WEB SITE:  Geoff Endris has been hard at work to get our new website up and running.  Please go to ecsail.org, log in with the password that Geoff sent to you individually, click on MEMBERS and you will see a world of information.  You will find a ‘Member Listing’ of all current members of ECSC.  You will also have access to a PDF copy of our orange 2016 Membership Booklet.  You will be able to access our club By-Laws as well as General Club rules and much more.  Many thanks to Geoff for the many hours that he has spent making this happen.…

Well the second week of sail camp is about to come to a close, and the kids all seem to be having a great time!  Our Junior team is performing well instructing the campers, and we have exposed over 30 young people to the sport of sailing in the past two weeks.  Parents must be talking to their friends about the camp, because believe it or not, I am already getting inquires on when registration for next year’s camp opens!  I have been taking some video and pictures for the website, and once I get some time to compile and edit it I will get it up there.  Btu for now, here are a few pictures of the campers.

The Junior Race team has also been busy and placing well.  In the I-LYA Junior Travelers Series, Cameron Douglas is currently 4th, Reagan Lessick is 7th, and Jonathan Schwartz is 24th out of a total of 44 boats!  Great work team!

Each year the team races 5-10 Saturdays during the months of June, July and August, around Indiana, Ohio, New York lakes.   July 17 we will land on the Island of Put-In-Bay, for Junior Bay Week, where the team will do battle once more.  The regatta will consist of up to 15 races in 4 days on Lake Erie. Came has made this trip many times over the last 6 years, and this year will be his last, since he will age out. He has won 2 out 4 travelers series races.  So we are believing he will show well at bay week this year and go out on top.  Cam’s teammate at Junior Bay Week, Reagan, is a young 16 year old sailor.  She is 5’3″, she is big on winning, and had been working out all winter.  Reagan will be the force that will be pushing the boys this year.

Wish your Junior Team Well and follow them here!…

All items listed in the Discontinued Items section of our Online Catalog will be reduced by 50% off the catalog price for this holiday!

Sizes and colors are limited. Refer to the online catalog for photos and product descriptions.